This article was originally published by Artslant on July 24, 2014.
Mies van der Rohe is such an historic presence. The aftershock of his innovation is still palpable, reflecting as it does the evolution of an “international style after World War II.” It is hard to imagine, therefore, how one might absorb his architecture into daily life—much less install an exhibition under one of his roofs. That is the challenge posed by the Elmhurst Art Museum, an institution that purchased van der Rohe’s prototype for suburban life, the McCormick House, in 1992. Chicago-based artist Heidi Norton rises to that challenge. Like a plant slowly stretching across a perfectly manicured wall, her solo show, Prismatic Nature, transforms the museum with increasing intensity. Norton not only grows into and through McCormick House, but revises van der Rohe’s utopic vision while doing so. In the hybrid space that emerges, she emphasizes institutional and personal collaboration, using organic forms that soften Modernist and New Age tropes, presenting a map of her own aesthetic ideals in the process.

To create the design of the house, van der Rohe transformed one vertical strip of windows from his iconic 860 Lake Shore Drive skyscraper into a modern, horizontal bungalow. Although the single family home was conceived as an alternative to tract houses constructed in Levittown—its own utopian vision for post-war suburban life—the McCormick house remains unique; one of only three houses that van der Rohe built in the US, it never caught on. When the museum purchased the home, it was disassembled, and paraded down the streets of Elmhurst to 150 Cottage Ave., where it was reassembled, and modified, becoming the Elmhurst Art Museum of today. 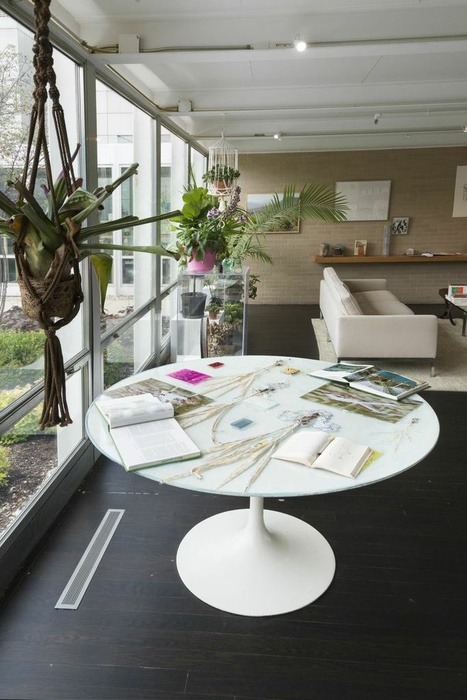 Perhaps the first instinct an artist would have when addressing such a sleek, modular structure would be to overwhelm each and every cranny with signs of personal affect. This is not Norton’s tact, however. At least not in the beginning. Instead, she emphasizes van der Rohe’s own mission to integrate interior and exterior architectures, applying a series of glass screens on the windows of the Hostetler Gallery, the main exhibition space within the museum. Strangely sentimental, these site-specific tableaux filter light inside and outside of the otherwise empty space with plant life, textual quotation, photographs, stones, rocks, and resin. Van der Rohe floor plans, protruding nails, swaths of dirt, or foxed old notes written by her father about what books to read to best live off the land, are collaged together in a myriad of color, with rippling textures. The sculptures stand like semi-transparent pages of a field diary, inserting a subjective presence that troubles van der Rohe’s seemingly objective windows.

In these first impressions of the show Norton bravely emphasizes the space at hand, isolating a theme that will gather force through subsequent galleries: that of seeing through a lens. With so much space inside, one is drawn to the park outdoors, and the camera obscura Norton installed for visitors to inhabit. Three horizontal picture planes hang inside the Hostetler gallery, also compositions of plants. One in the center of the room lies at waist height with plants growing up from piles of earth. Partially obscured by that vegetation, one can just make out blueprints of landscaping intended for the original McCormick house, along with the garden map of a prominent local horticulturalist, Louisa King. The other two horizontal screens are less central, hanging just below the ceiling, with plants fixed upside down. These too are remarkable, however, sharing their own host of images—a hand pulling fruit, with an elegant diagram overtop. Here the plants grow downward—as though by some strange magic—bucking conventional expectations.

Down an adjacent hallway gallery, Norton exhibits three other artists—Spencer Stucky, Eileen Mueller, and Molly Brandt—illustrating the reflexive community she works within, and softening the traditionally unified modernist position. Prismatic Nature exposes processes, conversations, and contexts that Norton not only emerges from, but also contributes to. Stucky, Mueller, and Brandt similarly use quotation, via distilled framed photographs that juxtapose plants and architectural sites. A meandering wall drawing of plants creates a secondary hand drawn landscape that travels beneath the frames of the work. Along the opposite length of the hallway, Meuller presents a series of photographs from the infamous Black Mountain College Archive—another bastion of utopic vision and rare community.

On the other side of the museum, one enters the McCormick’s original living room. Here things begin to really pop. Norton has so fully integrated the project of Prismatic Nature, that it blurs the lines between whatever historic modernist furnishings remain constant and the added plants, books, research notes, and installation elements. The screen motif appears again and again here in different forms: from a stacked series of parallel glass plates reminiscent of scientific slides in a drying rack, to the low-lying coffee-table-esque plinths that present entire books, crystals, and potted plants, to museum vitrines that feature mineral selections from theLizzadro Museum of Lapidary Art. Further echoing the field notes aesthetic, Norton offers her own artist book co-written with Monica Westin. The publication features loose photographs, a built-in wooden brace for specimen collection, and pages of text including, among other things, how the artist makes her studio, and the once-vernacular language of flowers. 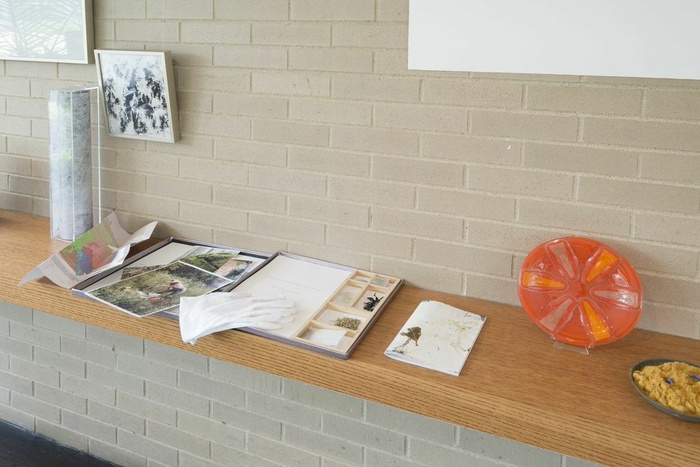 In an interview, Norton states, “I am interested in the back-to-the-land movement in the ‘70s, because that is the time period when my parents rejected the notions their parents raised them with—modern idealism and the perfect 1950s lifestyle. I am especially thinking of this movement and how it relates to the suburbs—what type of space that is and why it was created.[1]” The sentiment recalls an Eva Hesse/Sol LeWitt exhibition at the Blanton Art Museum I viewed a few months ago in Austin, Texas. The exhibit, Converging Lines, documents the influence the artists had on one another’s practice, demonstrating a vivid dialogue between drawings, sculptures, and paintings—especially the tension between straight lines (LeWitt) and not-straight lines (Hesse). What was most exciting about the show was the evident discourse of its constituents, and the tangibility of its friendship. A similar tangibility emerges here, where Norton effectively expands van der Rohe’s vision to integrate exterior and interior spaces: to blur traditional ideas surrounding the individualism of artistic endeavors, and the subjective lenses our communities engender.