The following article was originally published by Artslant on September 21, 2014.
“And we’ll pretend that people cannot see you. That is, the citizens. And that you are free of your own history. And I am free of my history. We’ll pretend that we are both anonymous beauties smashing along through the city’s entrails [She yells as loud as she can] GROOVE!” —  Amiri Baraka, Dutchman, 1964.

We gathered in the lobby of a recently renovated bathhouse at 1914 W Division Street in Chicago’s Wicker Park. The time was 11:00pm. Upon arrival, everyone received a large bottle of water, a bathrobe, sandals, and a locker key—though standard fare for any public bath, it isn’t typical theater attire. Yet this was the obligatory uniform for New York-based artist Rashid Johnson’s audience. We gathered to see his rendition of Dutchman, the historic 1964 play by Amiri Baraka, an indisputable forefather of American literature. Commissioned byPerforma for its original debut at a New York bathhouse last November, Johnson’s cast reconvened for a second time in the artist’s hometown Chicago this fall. In the lobby, Johnson explained that this particular Division Street bathhouse had personal significance. During grad school, it was a place he regularly came to decompress and reflect. His studio assistant reminded us that the higher one sat the hotter it was, and to please drink water when we felt it necessary. Down the stairs we went thereafter into the men’s portion of the establishment until our assembly arranged itself on three tiers of wooden bathhouse benches, already sweating in the deep dark of a sauna. Johnson took the stage only once in the beginning of the work, standing before the massive great oven to throw two cups of water into the dark pit it contained. Above and behind his head, a sign in all capital letters reminds bathers to add water with caution, lest it get too hot.

The actors take the stage. Clay (Kevyn States) enters first. He reads the newspaper—a current issue of the New York Times. Lula (Tori Ernst) then walks on with a purse. With her bathrobe almost closed, a red bikini peers out nonetheless. Everything in the two act play occurs between these two characters—Clay, a 20 year-old black man, and Lula, a 30 year-old white woman—as they ride the New York subway. Each actor sits on facing benches, and the rest of the audience fills out the rest of our narrow, cramped quarters. Like a vampy character out of Tennessee Williams play, Lula aggressively goads her costar to his breaking point. She knows his type, she claims. She proves it, mocking his predictability, guessing the names of his friends, and the habits of his parents; mercilessly, she chaffs against his own sense of place in mainstream America. She mocks him for wanting to be a Black Rimbaud, casting racial slurs with stunning expertise, infusing the air with a sexual charge as unpredictable as it is inescapable. Clay is mild mannered by comparison. Level-headed even. Honest. He tends to give people the benefit of the doubt. Observant of social cues. He is the middle class black man and she belittles him for it, driving the history of slavery into his heart like a stake. “Boy, those narrow-shoulder clothes come from a tradition you ought to feel oppressed by,” she says—and on and on relentlessly, to such an extent that when he finally responds in kind, he unearths a latent rage so confusing as to destroy any sense of self he’d previously assumed. As though to further embody the extent of Clay’s crisis, Lula knifes him to death in the final moments of the play. She plans to throw his body outside without consequence while the rest of the audience—all of us sweating unbearably where we are stacked like sardines in the cramped/dim/hot box—watch silently like indifferent commuters. 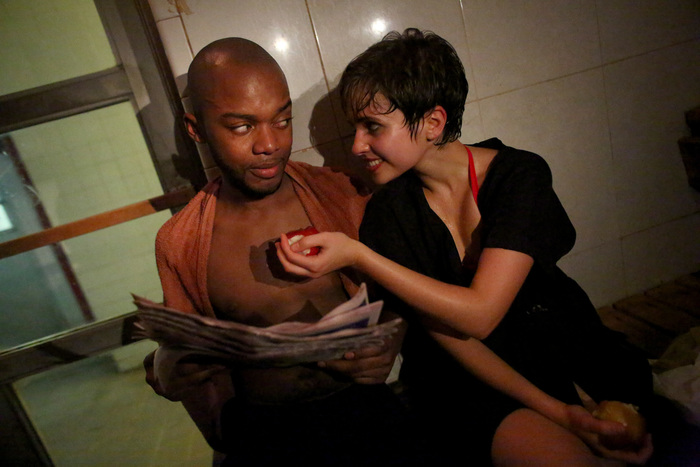 The play won Baraka an Obie when first produced at Cherry Lane Theater, putting the poet squarely on the map. Back then it was then unheard of for a black man and white woman to share a stage, audiences responded with polarizing vehemence, sparking a significant discussion about American race relations. Yet the play also feels biographically significant. Born Leroy Jones, Baraka published under the name of LeRoi Jones in the 50s as another member of the Beatnik literati. He ran one literary journal, and a press where he featured his own poetry alongside that of iconic peers like Ginsberg, Kerouac, et al. In 1964, Baraka was still working within that white male world of Greenwich Village. After the death of Malcom X in 1965, however—just a year afterDutchman—he left his wife and two children, moved to Harlem, and changed his name to Amira Baraka. Clay’s character seems to portend Baraka’s biographical transformation, yet while Clay is stone dead at the end, Baraka went on to found the Black Arts Movement: a movement dedicated exclusively to Black American artists and art. Through that office, he furthered his already significant impact, fostering a whole generation of artists.

Intermission was incredible. Everyone spilled out of the sauna with decided relief. One woman stood in the men’s cold plunge for the entire ten minutes. Others sidled intermittently up to the rain shower — a sobering overhead faucet that had only two settings ON or OFF. ON was ice cold. I watched an old man stand under that ice shower for a full minute to cool off. He grinned, sheepishly exuberant. By leaving that room behind, everyone felt better, despite the haunting humidity. Others lounged in reclining beach chairs. I drifted uncomfortably, still too hot, drinking so much water as to feel a little sick.

The moment in between acts was as significant as the staged program—this bathhouse had closed in 2010 after being open since 1906. When it reopened a few years ago, the entire building was rehabbed. The play offers a similar architectural beginning, even while it changes with every performed context. Last November, Baraka was still alive, having long since retired a Black National agenda for a socialist one. This September we not only feel the absence of the poet, but also the echoes of Ferguson.

Johnson regularly draws on historical legacies. In a 2006 self-portrait, Self-Portrait Laying on Jack Johnson’s Grave, the artist lies on his back, exhausted, on the grave of the famous boxing heavyweight champion. Prior to taking the photograph, Johnson had been break dancing on the tomb until he was too tired to move anymore. By dancing on the old athlete’s grave the artist is entreating a ghost almost, teasing it to answer—to laugh or chastise. In the photo, Johnson seems resigned to exhaustion, and yet by lying down parallel to the ground he becomes more in touch with the dead man than ever. He often draws on literary references as well—Zora Neale Hurston is a regular figure, for example, or W.E.B. Dubois. He’ll use the books of astrophysicist Neil deGrasse Tyson as sculptural components, and even asked to borrow then-Senator Barak Obama’s suit for an exhibit at The Renaissance Society (to no end). These figures are specific, and Johnson creates specific relations with them, muddling any tendency to stereotype and generalize accomplished African Americans. Titles and materials alike reflect a dense galaxy of biographies. By engaging these figures, Johnson bounces off of them. He studies these figures, and responds. In 2012 he curated an exhibit by Sam Gilliam—a well-established painter from The Washington Color School—at David Kordansky Gallery in Los Angeles. “One of the things I specifically learned [from Sam and his generation] was that racial discourse was brought to their work, there was a lot of opportunity for projection. What I really hoped to do with my work was to at least be able to define my relationship to race.” (“The Art of Inspiration,” Chloe Schama, Wall Street Journal, 2013). It is as though Johnson is using a kind of echolocation strategy, indexing these exemplary black figureheads into the orbit of his work, while measuring, changing, and adapting his own position. Dutchman is just another example.

The play becomes a material for Johnson to work with; by working that material, he is able to incorporate not only Baraka’s artistic and biographical trajectory, but also his agency in the Civil Rights movement, and even more generally, American history at large. Suddenly the play’s script is fertile, dynamic, and ambivalent. Johnson establishes an embodied conduit by staging the production in a bathhouse, such that one must suddenly re-experience an historical moment from a present, subjective sweat. A sweat the Johnson shares with us, sitting as he did amongst the audience for the entire duration. The bathhouse is a significant actor in the play—as a predetermined condition, and an active agent—it works upon the audience just as the actors do. Yet also the audience chooses to remain in its discomfort, to endure.