The following article was originally published by Artslant on December 18, 2014.

The ways by which men arrive at knowledge of the celestial things are hardly less wonderful than the nature of these things themselves.

Walking down Franklin Boulevard in Chicago’s Garfield Park, an otherwise nondescript bungalow stands out because of the strange, multicolored rock jutting out of its front yard; this object—like a meteor from a sci-fi B movie—hovers over 10 feet above the ground, mounted on a long metal pole. It marks the beginning ofPlanetoids, a solo exhibition at the Franklin Gallery where artists Sarah and Joseph Belknap carefully intersect uncanny and everyday bodies. In this and a concurrent exhibition at the MCA the collaborative pair translate celestial bodies into terrestrial spaces, concentrating on how those bodies intersect with subjective experience. 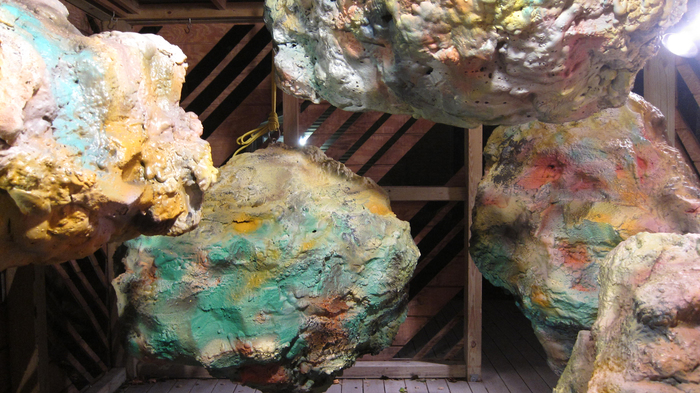 The main portion of Planetoids continues in a backyard gazebo behind the bungalow in a 12 x 12 foot open air exhibition cube built specifically to host artist installations. Here, the Belknaps installed an interactive field of four extraterrestrial-looking rocks. Those multicolored, irregularly shaped “planetoids”—each roughly the breadth of my arms—hang by yellow mountaineering ropes strung from the gazebo’s 8-foot-hight roof. Some room exists between the rock formations—just enough to invite viewers to walk between the sculptures, activating the negative space they prescribe. Upon entering, one cannot help but bump into the planetoids, causing the narrow space between bodies to shift and jostle. One is bumped into and bumping against strange bodies. The rocks are surprisingly light and their surfaces boast an abstract myriad of colors; puce, neon yellow, gray, blue, brown, green collude vigorously in small spatters. 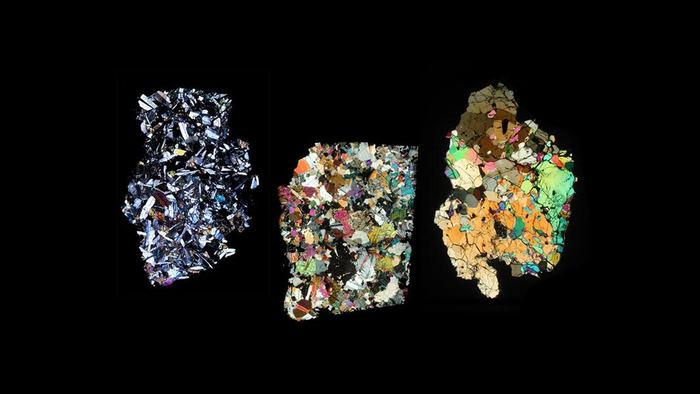 Microscopic images of meteorites; Meteorites from Vesta. Images courtesy of NASA/University of Tennessee

“The colors of the planetoids are based on polarized microscope images of meteorites from the asteroid, Vesta,” the Belknaps explained in a recent email. “Each color on the images depicted a different mineral or mineral composition—another way of seeing.” Although the colors they used to paint each surface is based on scientific data, that data is not tied to human sight specifically. Meteors would not, for instance, appear to us in the colors prescribed by the data. Rather, the colors translate data about the mineral content of each stone, rending what is typically invisible to the human eye both visible and identifiable.

“We are extremely interested in filtered seeing,” the artists continued. “It allows us to see things that the human eye cannot see. It is both real and faked/mediated. The enhancement and modification is not done to deceive but rather to show what we cannot see.” The Belknaps thus play with the translation of extraterrestrial bodies, bringing them into a human range of perception, whether that means shrinking a meteor so that it is proportionate to my body in a backyard, or blowing up microscopic attributes so that they become visible to my eye.

In August, scientists picked up on a series of electromagnetic pulses emitted by a comet. Although below the range of human perception, the pulse was described as a “song.” Scientists found a singing comet!—one producing music that, at least according to human translation, is more akin to an experimental synth track than the nonsecular compositions of The Vienna Boys’ Choir. “The scientists think it [the song] must be produced in some way by the activity of the comet, as it releases neutral particles into space where they become electrically charged due to a process called ionization. But the precise physical mechanism behind the oscillations remains a mystery.” Listening to the comet on Soundcloud, I remembered the end of Jodi Foster’s Encounter (1997), a movie that played so often on TV during my adolescence that I never saw the entire movie sequentially. Still I remember the end, where she waits for a signal from aliens in outer space. How strange a conclusion if the signal she finally received did not come from the bug-eyed alien icon popularized in the 90s, but rather from an inanimate rock minding its own business in a far corner of the universe. 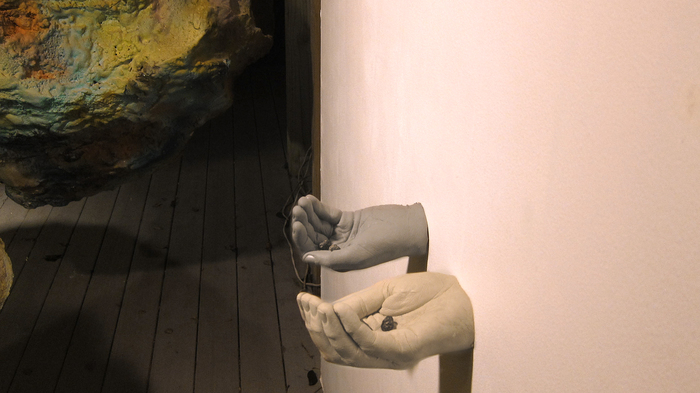 On the only dry wall in the Franklin exhibition gazebo, two silicon casts of the artists’ hands protrude strangely; each hand—one gray and one white—cups small pebble-size meteors in its palm. Normally (the day I visited the space they were not) these hands also shake, causing the pebbles to jump and jiggle ever so slightly. Like the body-sized planetoids, these life-sized hands further problematize one’s experience of scale. Certainly the pebbles feel like translations of the larger hanging objects, yet in one instance the planetoids are larger than the body, while in another the body is significantly larger than the planetoids. By virtue of the gazebo, they exist in the same frame, creating a vertiginous experience. These troubling and simultaneous scale shifts convey an unstable material world, whose properties are only visible according to the perspectival filter or translation being applied. 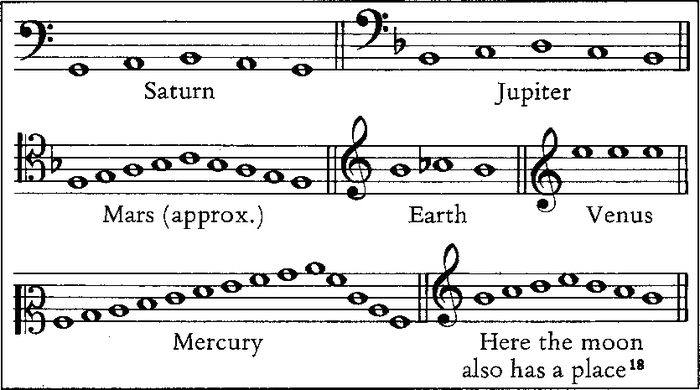 Johannes Kepler’s “The Music of the Spheres”

I am reminded of Johannes Kepler, suddenly—a German mathematician from the 1500s who discovered three major laws of planetary motion. Following on the footsteps of Copernicus, Kepler’s model of the universe embraced the sun at the center of the Universe, while seeking to quantify and predict the movement of planets; his course of investigation led to a then-revolutionary conclusion that Mercury’s orbit was an ellipse, rather than a perfect (and thus more divine) circle, as had been previously supposed. In addition to his mathematical proofs, Kepler believed the planets possessed an extraterrestrial harmony, what he referred to as “The Music of the Spheres.” This was not an audible harmony, but rather emerged from the mathematically harmonious and proportional movement of planets in time. Based on that harmony of geometrical mathematics, planetary songs modeled their behavior. Venus, for instance, only had one note. Like our singing comet, the “song” is not literal, but a translation of regular movement beyond the frame of human perception.

In a concurrent show at the MCA, curator Karsten Lund places the Belknaps in the historical lineage of Bruce Nauman, Eva Hesse, Robert Overby, and Vija Celmins, emphasizing the artists’ ability to create material surfaces of extraterrestrial bodies in terrestrial space. The Belknaps’ site-specific installation Vredefort Dome/Aitken Basin Skin (2014) features a silicon-mica flake cast of two craters—one on the moon and one in Arizona—creating a scaled and hybrid topographical map of inter- and extra-terrestrial landscapes. The pockmarked black surface consumes the length of the gallery, rising up from floor to rear wall at a 60 degree angle. In a moment similar to the Belknap hand casts, a breathtaking print of the sun is mounted on the facing wall, to the right of the gallery entrance; 12 Months of Sun Spots is lit so softly as to be easily overlooked, yet it provides a counterbalance to the room. The moon and the earth have the sun in common, orbiting as we all are around its bright light. The balance feels formal as well; the print’s crisp roundness echoes the crater and pockmarked shapes in the landscape. 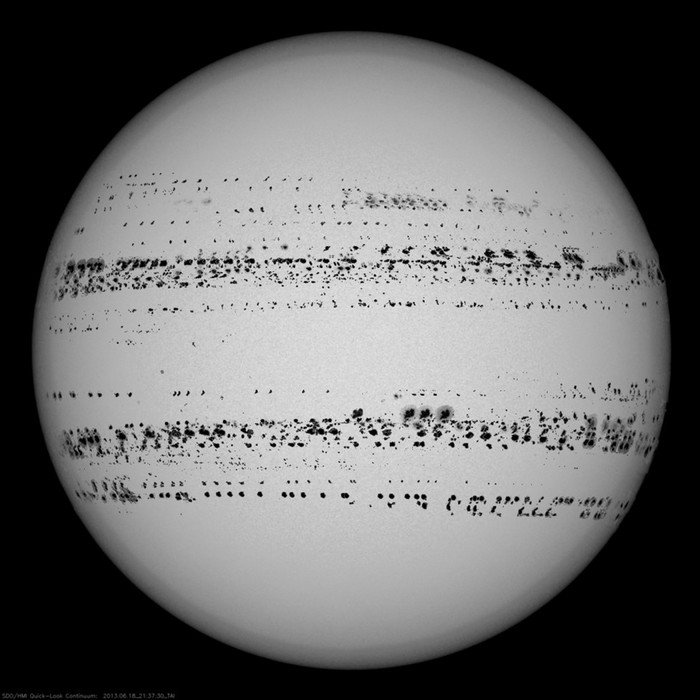 In the next room, the Belknaps installed a series of 12 “Moon Skins” and “Exoplanet Skins.” Like the topographical crater map, they are also made of silicone and—like the Franklin planetoids—boast complex surfaces of texture and sometimes color. The irregularly concave forms hang limply off of the wall, like deflated basketballs or wrestling masks (see image at top). They feel expired somehow, but nevertheless mesmerizing. One wants to touch them, to feel the differences in their surface, perhaps even to explore the inside of the skin—a private space where one imagines a planet might once have resided.

Finally, to the right of the skins on the museum mezzanine, the artists installed a series of five videos on square television screens that stack modularly. 12 Months of the Sun, represents a subjective intersection between the artists’ lives, NASA’s live stream (and translation) of planetary activity, and the planetary activity itself. They collected the images on a regular, though nevertheless subjective basis, using a NASA iPhone app. The screen shots were modified in order to reflect and highlight certain threads of data. Here again scales of space and time are collapsed and refracted through the unique individual experiences of Sarah and Joseph Belknap.